Success a reality for Brisbane startup

Success a reality for Brisbane startup

BRISBANE virtual reality company Lightweave has tripled its projected sales in its first year of business, thanks to high-profile collaborations such as with the Brisbane Heat.

Managing director Sam Hussey said the company’s growth had exceeded even its most generous expectations, with 2017 looking just as promising.

“I was working in advertising so we were discussing doing some apps for businesses,” he said.

“We got on to talking about virtual reality – which he had been doing some work on – and my mind went crazy.

“We basically said let’s start a company, and I started going to the clients and showing them what we could do. It’s been pretty much non- stop since.”

Mr Hussey said Lightweave’s strength and potential comes from the way companies can use VR as a marketing tool, by way of data collection and social media.

For its collaboration with the Brisbane Heat, the company created a program so fans felt they were standing at the crease in the middle of the Gabba facing balls from fast bowler Ben Cutting.

“We chose a bit of a different path to most developers who are doing this kind of thing,” he said. “A lot of people when they think of VR, they automatically think of gamers.

“Basically, I look at the ability to work with brands that are trying to tell a story and show them how we can deliver that experience for them.

“We’re dealing with so many brands who want that, so we can go straight to them and we’re not having to chase the home user.”

Lightweave also supplies VR and augmented reality to shopping centres around the country, with some seeing up to 2200 users a week.

Mr Hussey said the first overseas licences would be issued this year. 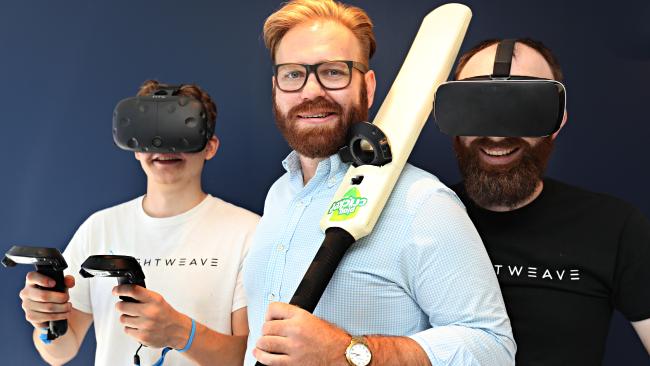